The Communities of Hampton Roads

Click on the map for information about a specific community 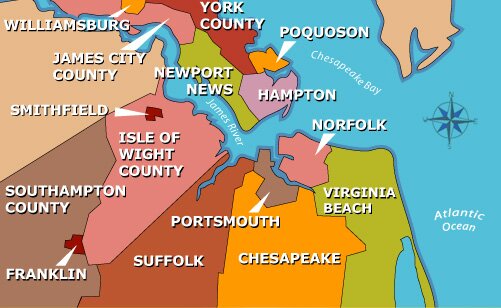 Hampton Roads is the name for the southeastern region of Virginia. The region's most notable geographic characteristic is proximity to a variety of waterways. Bordered on the east by the Atlantic Ocean, Hampton Roads is where the James, Nansemond and Elizabeth rivers pour into the mouth of the Chesapeake Bay. "Hampton Roads" is a nautical term meaning "protected anchorage"or "a safe harbor." With the world's largest natural harbor, Hampton Roads' ports have played an important role in the region's history and economy.

Hampton Roads is home to 1.6 million people and is the birthplace of Colonial America. It is home to Jamestown, the first permanent English settlement and to Colonial Williamsburg. Its rich history, thriving maritime industry and beautiful waterfront landscapes merge with livable communities, modern technology, economic prosperity, and a strong military presence to create a unique and welcoming place in which to live, do business and raise a family.

Hampton Roads is rich in intellectual resources. The region is home to eight universities and 4 community colleges attended by over 89,000 students. In addition, the region boasts two federal laboratories: The Thomas Jefferson National Accelerator Facility, a U.S. Department of Energy facility that conducts basic and applied atomic research and the National Aeronautics and Space Administration's (NASA) Langley Research Center, an 800-acre facility conducting research in aviation and space sciences.

Located well within a 30 minute commute of most business and residential areas in the region, Norfolk International (ORF) and Newport News/Williamsburg International (PHF) Airports provide air service to over 4 million passengers annually. Nine major airlines and six regional commuter airlines provide over 260 flights per day to 25 airports of which 17 are major hubs and international gateways.

A pre-eminent maritime center, the region is thoroughly entwined and proudly identified with the water which includes over 26 miles of Atlantic Ocean beaches, the Chesapeake Bay, and a host of picturesque rivers and inlets. Hampton Roads is blessed with environmental assets as well, including First Landing State Park, False Cape State Park, the Great Dismal Swamp National Wildlife Refuge and Back Bay National Wildlife Refuge, to name a few.

Hampton Roads is rich too with cultural treasures reflecting the artistic diversity of its communities. Throughout the year, festivals celebrate the cultural heritage of the region. History, music, drama and art treasures can be found in the theaters and museums of Hampton Roads.